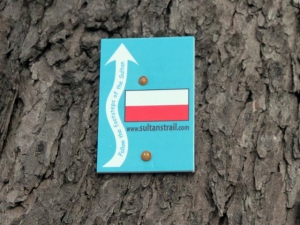 A sign has appeared on the horse chestnut tree guarding the bridge, which I then spotted repeated on the bridge itself and on the ‘Kat Steps’ up to the Catherdal where the path ran cold. On getting back to the studio I followed a less demanding route on my computer  to http://www.sultanstrail.com as promoted on the stickers themselves, to discover a new walk from Istanbul to Vienna.

Süleyman Kanuni, sultan of the Ottoman Empire made the journey in 1529, and then again in 1532, when he was unsurprisingly not very welcome inside the city gates. Nowadays, the website tells us, the trail is a path of peace and a meeting place for people of all faiths and cultures. It begins at St Stephen’s Cathedral in the centre of Vienna, whose clocks ‘are made of the remelted Ottoman canons. The path passes Austria, Hungary, Croatia, Serbia and Bulgaria and ends at the tomb of the Sultan, behind the Süleymaniye mosque in Istanbul’.

While the Ottoman armies were ultimately defeated, the horse chestnut tree which they cultivated in distant days of empire did manage to conquer the whole of Europe  – through the irrepressible force of ornamental beauty. It was documented in Austria, Hungary and Germany by the late 1590s and in England around 1600. I hope it is recognised and celebrated along the Sultan’s Way.

Sorry, the comment form is closed at this time.